When most people think about cleansing their face they’re probably picturing a quick rinse with a foaming cleanser. Though it’s a quick way to clean your face, it isn’t that effective at totally removing the build up that accumulates on your skin during the day, and can leave your skin vulnerable to breakouts and congestion.

Skincare industry insiders will tell you that you’re better off cleansing twice - once to remove your makeup and the day’s build up, and again to ensure all traces are gone and your skin is completely clean and stimulated. This is known as double cleansing.

What is double cleansing?

When was double cleansing invented?

You’d be surprised! Though double cleansing is a new concept to many, it’s actually nearly a century old now - double cleansing was popularised in the 1930s. Erno Laszlo was the first to really emphasise the importance of a two-step cleansing routine, back in the days when cleansing with cold cream was the norm. Double cleansing wasn’t quick to become popular however - Erno Laszlo had a very exclusive clientele list, and his name was circulated amongst Hollywood elite. His clients included Marilyn Munroe and Audrey Hepburn, who were both fans of this effective, thorough way to cleanse your face.

Here is what you need to double cleanse correctly:

Check the cleansers you already own - you might be able to try double cleansing with what you have. But beware - often using just one cleanser is way too harsh, especially as most cleansers are designed to be used alone. Ideally you need at least one out of two steps to be very gentle. We recommend either cleansing oil such as Erno Laszlo's Detoxifying Cleansing Oil, or micellar water.

Erno Laszlo’s famous approach was to use an oil cleanser as the first step, and a facial soap as the second step to stimulate and smooth the skin. Although you might think that you need two cleansers in order to do a double cleanse, it’s not always the case.

What are the steps involved in double cleansing?

The original way to double cleanse, created by Erno Laszlo, is done through these steps:

Can I use my cleansing device to double cleanse?

Definitely! If your device is designed to help remove makeup, you can use during both steps. Otherwise, it's best to cleanse away makeup and grime without your device first, then use your device for the second, more deep cleanse.

TIP! Our double cleansing step by step guide, above also allow the use of a cleansing tool - simply use your Clarisonic or Foreo device during the second cleanse (from Step 5).

Do you really need two cleansers to double cleanse?

The reason for choosing two different cleansers is because you need something with stronger cleansing power to remove the first layer or makeup and build up on your skin. This stronger cleanser isn’t always the right cleanser for your skin type though!

Here are some of the most popular ways to double cleanse:

If you're new to double cleansing and want somewhere to start, why not start with the original? 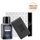 - A matched, travel-sized double cleansing duo - Great value to try double cleansing - For all skin types, including sensitive - Allows you to thoroughly cleanse on the go - Perfect to reduce breakouts and blackheads

The oil cleansing method (OCM) is famous amongst skincare experts for its ability to both completely remove everything and to nourish and balance the skin. As a bonus, it means only having one cleanser in the cupboard!

Who should use the double cleansing method?

There aren't any skin types that wouldn't benefit from a double cleanse. That is to say - you should definitely at least try double cleansing! You'll be able to feel the results, especially if you already have a skincare routine tailored to your skin. Double cleansing helps your skin absorb active skincare ingredients better, as it helps to ensure your skin is fully clean.

What are the pros & cons of double cleansing?

Overall, it’s pretty clear that most people should be double cleansing! Although it does take longer, you’re adding less than a minute to your routine (and in time it’ll be second nature to you).

If you’ve never tried double cleansing, you should - your skin will thank you! This very thorough cleansing technique is both more gentle and more targeted to your skin type, and we have Erno Laszlo to thank for making it popular. With almost 100 years of history, this face cleansing technique remains a staple for beauty industry insiders.